Hello! This has been a very busy month for SourceHut. Thank you for supporting it during the alpha! Today our users are 13,195 in number, with 438 new users joining us since our last status update. Please give them a warm welcome!

I’ve spent a lot of time this month working on a bunch of operations-related tasks, such as monitoring and backups improvements. Our backup system is now triple-redundant and kept in check by three separate monitoring systems. You’ll see some of these reports on our public operations mailing list, or can dig into the raw data on our public Prometheus instance. I’ve also written up an operations manual to keep track of our approach and future plans for operations, so that you can be aware of what steps we’re taking to keep things up and running, and perhaps apply our techniques to your own self-hosted instances of SourceHut.

This month also saw design discussions on sr.ht-discuss regarding the eventual design and implementation of user groups (or “organizations”), and how they’ll affect billing, access control lists, reserved CI slots, and so on. Check out the archives for more: the initial proposal, and version 2.

We also deployed some improvements to responsiveness throughout the site, which you’ll probably have already noticed if you’re on mobile. Mobile users aren’t the only group to benefit, however: I took extra time to make sure the interface looks good at any subset of a 4K monitor, so our tiling window manager users can have a comfortable interface with a web browser at half-width or less.

Finally, we have a new mail server in place, which should be a little bit more maintainable going forward, and our legacy infrastructure has finally been overhauled. These were our last two servers which were not running on the standard Alpine-based load-out1. This unblocks…

Finally, work has commenced on the central project hub. This will solve the problems of discoverability of projects hosted on SourceHut, searching for new projects site-wide, linking together bug trackers and git repos, and more. This project is ostensibly called “hub.sr.ht” internally, but the intention is to deploy it at the top-level domain: sr.ht. 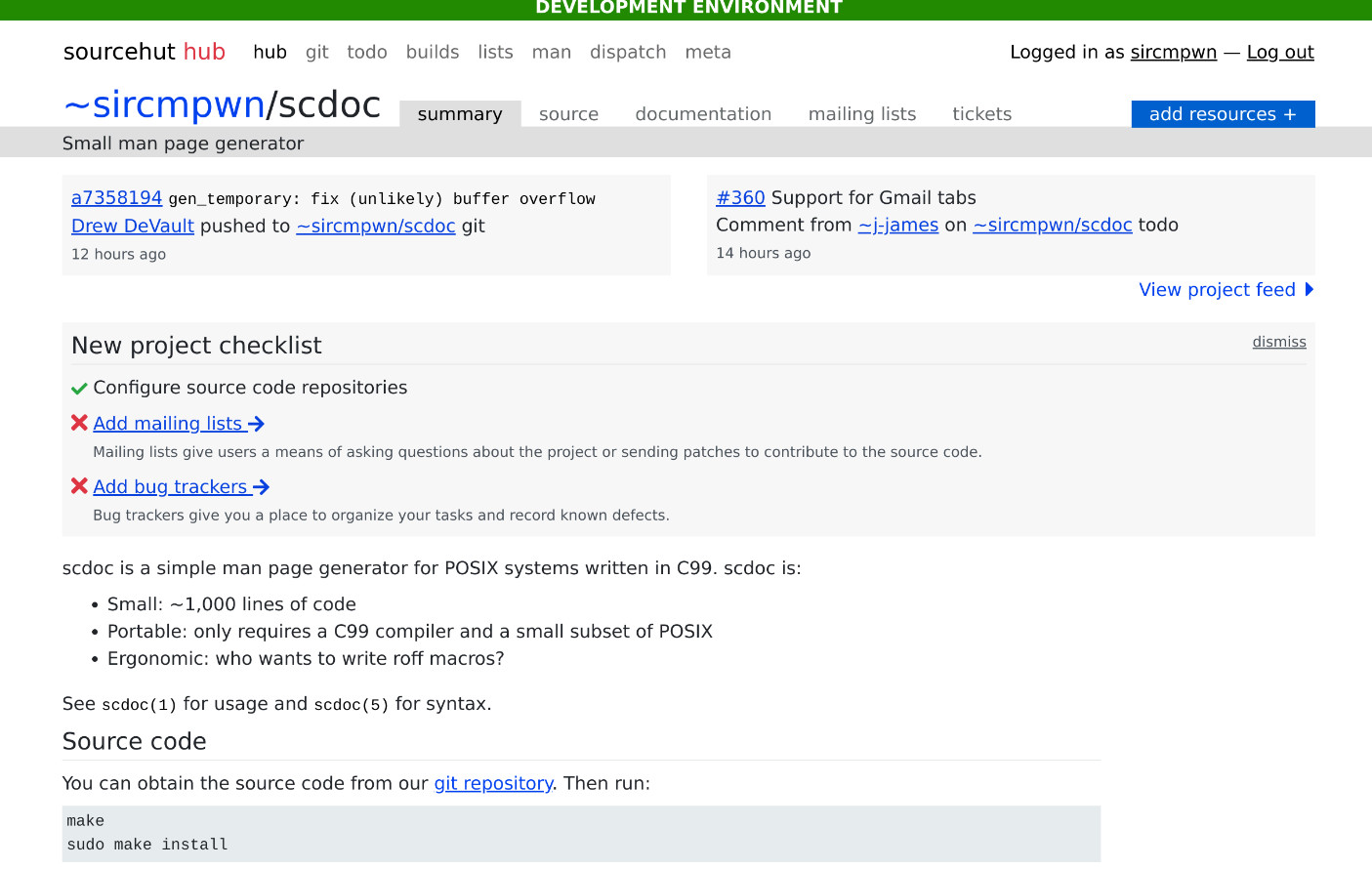 The hub will let you create a central hub for your project, with any combination of zero, one, ten, or more git and hg repos, bug trackers, mailing lists, and so on. You can add exactly what you need, as much as you need, and nothing you don’t need. This is why SourceHut is designed the way it is today. Many large projects have dozens of source repos, and giving each one their own bug tracker, pull requests, documentation, website, and so on, does not map to the actual project structure and frequently leads to clunky workflows on other hosts. The SourceHut project hub solves this problem better.

Following up on our recent git.sr.ht change to allow users to attach binary releases to git tags, I’ve implemented build artifacts for our CI as well. By adding a list of artifacts to your build manifest, you can have the files extracted from the build VM after successful builds and made available for download on the web or inspection via the API. Artifacts are kept for 90 days, but in the future I would like to let you indicate that certain artifacts should be kept permanently. Docs are available here.

I also provisioned a new build server this month, and as part of our ops work I’ve documented its specs here. This will increase our build throughput quite a bit, to better support our growing base of high-demand CI projects, including Nim, NeoVim, and OpenSMTPD.