As the unfeeling hand of time drags us relentlessly through its cold maw, we occasionally spend some of our precious moments writing (or in your case, reading), monthly status updates on the progress of the SourceHut alpha. Today is such a day - welcome back! Our audience has grown by 645 members this month, bringing our total userbase to 16,103. Please give a hearty welcome to our new peers!

A short outage for hg.sr.ht is planned to take place sometime in the next few weeks, as we migrate to a new box. The plan is outlined on sr.ht-dev, and we expect to experience anywhere from 5 to 30 minutes where hg.sr.ht is read-only. The final dates will be posted on status.sr.ht and announced on sr.ht-announce when the plan is finalized.

We have also migrated all services to a new markdown engine based on Mistletoe. If you encounter any strange Markdown-related problems, please file a ticket and mention ~araspik. Thank you for taking on this work, ~araspik! It took several months of effort to carefully test everything.

I have also completed a lot of system operations work in this past month. We have planned out improvements to our PostgreSQL strategy, which will enable us to have real-time backups and failover capability. This is mostly useful for limiting downtime during planned maintanenace, but is also useful for the long-term goal of high availability.

The most exciting development in this round of updates is likely to be the integration between lists.sr.ht and builds.sr.ht to bring continuous integration to mailing lists on SourceHut. You may have seen the announcement on the blog yesterday — give it a read. The tl;dr is that if you create a project on the project hub, and add a mailing list and git repositories, it’ll automatically submit any patches sent to your mailing list using the .build.yml (or .build/*.yml) from the repository. The subject prefix (for example, “[PATCH my-project]”) is used to identify the git repository that the patch is intended for (in this case, “my-project”). 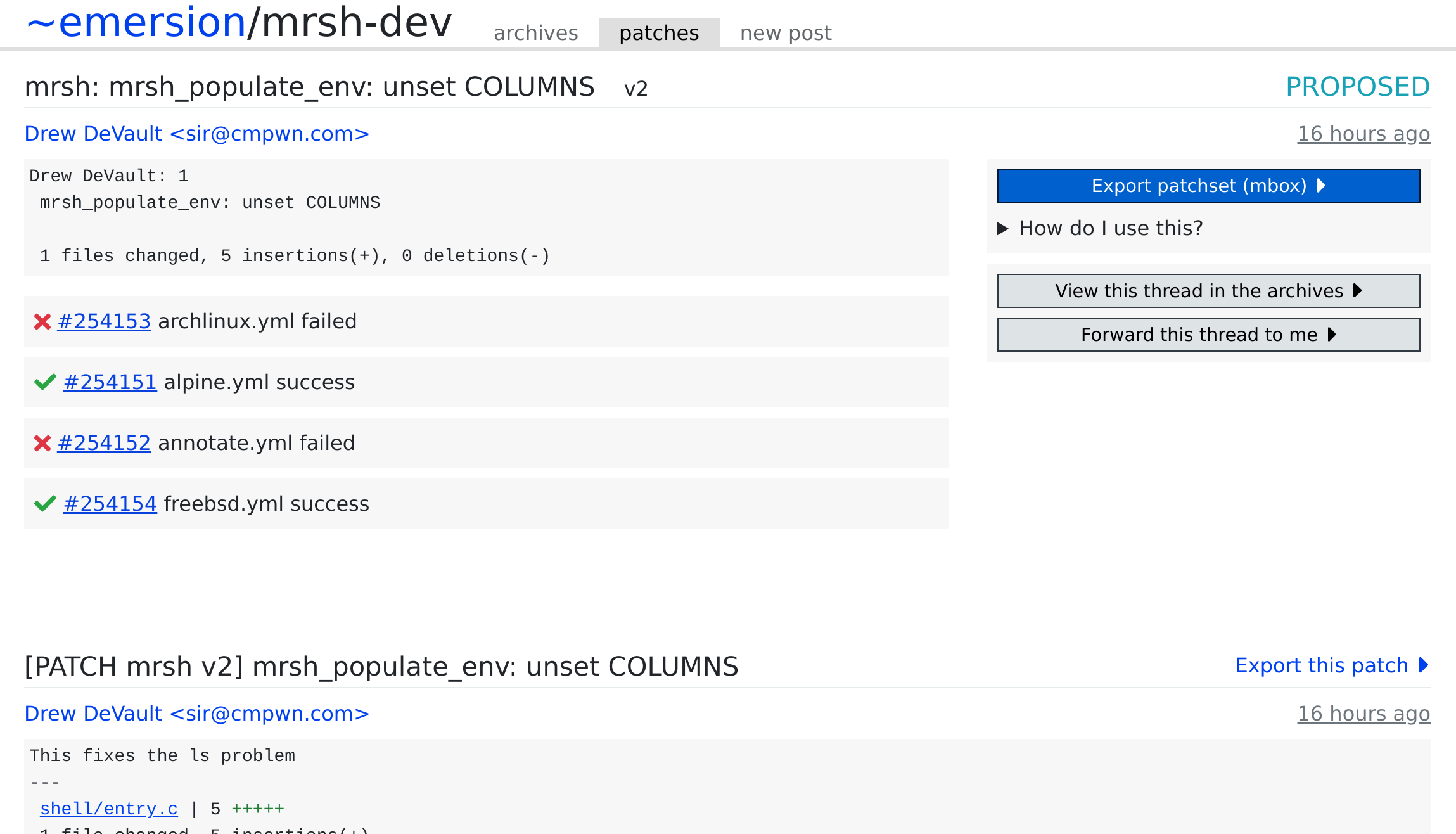 Additionally, at the request of Elias Naur, I have added a button to each patchset and thread in the mailing list archives which will forward the whole thread to you, so you can reply and comment on patches from the comfort of your inbox even if you were not subscribed to the mailing list at the time.

Following the addition of mailing list deletion to lists.sr.ht, the project hub was updated to support removing mailing lists and, if you so desire, deleting entire projects.